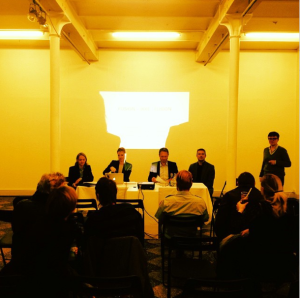 Carl Christian Ebbesen’s presentation dealt with the City of Copenhagen’s reasons for letting the aforementioned institutions merger. The argument in favor stems from the fact that the City of Copenhagen owns all four institutions, and the evident opportunity for gathering each institution’s smaller budget into one large one. Carl Christian Ebbesen conveyed that it was in the City’s best interest to maintain and keep the institutions’ individual function and expression, and as it looks right now, there is no interest from the City, to have Nikolaj Kunsthal (ArtCenter) function as anything but an Art Center. The City believes that the new initiative will create a new synergy that was not previously possible, that contemporary art can have a position and a role not only in Art Centers but also in relation to other institutions. The motivation for the merger is that contemporary art will be able to grow in the new combined entity and not suffer decay.

Mads Dambo’s presentation concerned the consequences of the merger between Fynen Art Museum, The Museum of Photography and Kunsthallen Brandts that now have become Brandts and Brandts 13. Mads Dambo explained that in Odense it was a good idea to merge because the motivation and vision for the merger was that the citizens of Odense should have access to visual arts of a high quality. With Aros in Aarhus as a model, the merger is not the outcome of a cost-cutting measure, but a way to heighten their profile as a city. The one concrete thing this entailed was to swap locations, such that contemporary art is now displayed in the old Funen Art Museum - Brandts 13, and to assemble the whole administration at Brandts Museum. Both institutions orientate themselves locally. They engage with business associations in the community, and create new initiatives in an ongoing dialogue with the residents. They meet therefore the citizens eye to eye and ask them what they want to see at Brandts, while at the same time cutting down the number of exhibitions and receptions. The merger has proven to be a success, as measured by the number of visitors the institution as a whole has received this year compared to last year.

The outsider on the night, relative to the Art Center polemic, was a teacher and economic researcher at CBS, Christian Rix-Nielsen. His financial research on mergers opened to a broader way of looking at the whole fusion problem, and added to the debate certain specific considerations that exist outside of the Art Center scene. Among others, how to measure success criteria. On the basis of his research, Christian Rix-Nielsen asserted how one could look at fusions as an art in itself. It's sometimes the most remarkable pieces that fit together when you have to merge, and it is an art to learn how to put them together. One of the most important factors for determining when a merger is a failure or a success is to be found, among other things, in the leadership and organization structures in the specific workplaces involved. It can be something as simple as looking at how the office landscape is arranged. If, for instance, one place is used to a smaller office space, and the second place a larger one, there is, in advance, a disparity in the way one is used to dealing with each other. It is also factors such as these that need to be compatible if you want the basis for a successful merger.